FIDDLER ON THE ROOF

Extended by Popular Demand Through Sept 12!

"L'Chaim — To Life!" The international smash about Russian villagers and their universal longings — love, wealth, freedom, God and home — makes its Goodspeed Musicals debut, boasting the beloved songs "If I Were a Rich Man," "Sunrise, Sunset," "Matchmaker" and more. Dance into the town of Anatevka, where "Tradition" is both embraced and challenged as local milkman Tevye sees his daughters fall in love in a time of extraordinary change.

Check out these resources to learn more about Fiddler on the Roof:

PHOTO EXCLUSIVE: "To Life!" A Day With Jesse Swimm at Goodspeed's 50th Anniversary Staging of Fiddler on the Roof

I can't recall seeing a version of Fiddler that I loved more than this. Miles ahead of the last revival on Bwy with Alfred Molina. Extraordinary cast, extraordinary staging and direction. I'm so happy I got to see the show on the final night of its run. It will stay with me for years.

The show was captivating and moving from start to finish. Adam Heller was genius, funny, an amazing artist!

Miles better than most recent Broadway revival! Nailed it.

Truly the highlight of our sailing voyage. The performance was indeed awesome and better than many performances seen on Broadway.

This is one musical I have never seen, on stage or movie. I had no idea what it was about, except, I knew I had to attend. I was fortunate many years ago to see Rex Harrison in My Fair Lady and the original Yul Brenner in The King and I. I will always remember Fiddler at Goodspeed. This cast is spectacular. Thank you for such a GREAT show.

Superb performance...we've been to many performances at Goodspeed and this ranks among the very best

This was a truly great production of Fiddler. Broadway quality!

We thought it the best show ever except for "My Fair Lady". Teyve, Adam Heller was as good as we remembered Zero M. to be.

I've been enjoying the Goodspeed musicals for over 35 years, but the "Fiddler" is definitely one of the better ones.

I have NEVER seen a better production of Fiddler. EVER!! And I have seen many. Adam Heller made me fall in love!!!!

Being a "Fiddler" fanatic all my life, the show was great. Notice my email address. I am a Tevye also but not a rich man. Have performed many times and as I sat in my seat I felt like jumping on the stage and doing a duet with Tevye, LOL. Great job guys, be well.

Right up there with the best I've ever seen

Totally entertaining. The "Bottle Dance" was worth the price of admission. A "must see".

My wife & I both loved the show.
If someone wants to see a show at Goodspeed this is the one.

AMAZING show!!!! Kudos to the cast and crew. Broaway caliber.

My husband and I loved it!! It was so good. 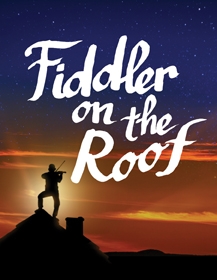 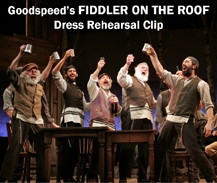 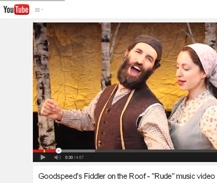