Hellooo Dolly! Well Hellooo Dolly! Join us when one of the greatest musicals ever written lights up the Goodspeed stage for the very first time. You’ll grin from ear to ear as Dolly Levi meddles in many a person’s affairs while at the same time seeking her own "half a millionaire." Jerry Herman’s rousing score is bursting with joy and tunes like "Put On Your Sunday Clothes," "Before the Parade Passes By," and "It Only Takes a Moment." Sparkling, dazzling, delightful—one musical that you cannot miss!

WATCH VIDEO
to meet the cast and creative team

"The idea of Klea Blackhurst playing Dolly Gallagher Levi sounded 100% right, but at a recent press preview offered by the Goodspeed Opera House, I see my estimated percentage was on the low side. How magnificent Blackhurst was in the way that she crowed “Before the Parade Passes By,” with a voice that shone like a new trombone and a new baton.  Blackhurst also played with the melody just a bit, but not enough to have unnerved Jerry Herman (or Charles Strouse). Best of all, even from this one number we could infer that Blackhurst will be no imitator of any previous Dolly, but will bring her distinctive personality to it. Hello, Dolly! runs June 28 through Sept. 8 at that East Haddam haunt, and you’ll only be sorry on Labor Day if you haven’t seen it by then."
~ Peter Filichia
See the video Peter is talking about at BroadwayWorld.com

Check out these resources to learn more about Hello, Dolly!:

LISTEN TO THE MUSIC
Hello, Dolly!
Put on Your Sunday Clothes
Before the Parade Passes By

Hello Dolly should stay at the Goodspeed Forever !! I saw it 3 times !!

I attended the show last night, 9.7.13. Wow! It was wonderful. It was my first time at the Good Speed and I enjoyed every minute of it. The cast was spot on!!

What a great show. The cast did an amazing job. My mom and I saw the show once and thought it was so good so we decided to go a 2nd time. Klea, Tony, and Ashley are amazing.

Don't miss Klea Blackhurst as Dolly. She's got Merman's voice, Channing's humor, and her own spectacular vocal coloring. And this production is a faultless gem. Every cast member shines. WOW!

What a great show! The whole cast was wonderful but Klea Blackhurst made it even more wonderful! My whole family enjoyed the show and the GSOH just makes everything that much more a special experience.

The show was so entertaining and enjoyable! The cast certainly deserved the standing ovation that they received.

Another amazing production at the Goodspeed! A wonderful musical made thrilling by an exceptional cast who sing and dance with joy. I too smiled the entire time. So well done!

I highly recommend #HelloDolly. Made me smile cheek to cheek throughout the whole show.

It is a GREAT production full of joy and love! 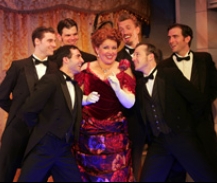