A Musical Love Letter to Broadway

Below the bright lights of Broadway, in the depths of the historic Sovereign Theatre, an acting troupe of mice rehearse their new musical. When the theatre is threatened by demolition and their diva Adelaide disappears, it will take all paws on deck to fulfill the time-honored tradition: the show must go on! Filled with singing, dancing, and show biz lore, The Great American Mousical is a sharp and witty tribute to life in the theatre that celebrates the two most glorious words in the English language: musical comedy!

BACKGROUND
Julie Andrews returns to Goodspeed to direct the brand new musical The Great American Mousical at The Norma Terris Theatre in Chester, Conn.  A stellar team of Broadway luminaries form the creative team for this smart and funny tribute to Broadway musicals, including Zina Goldrich (Music) and Marcy Heisler (Lyrics) who both received Drama Desk Awards for Dear Edwina, Hunter Bell (Book) who was nominated for a Tony Award for [title of show],   Tony Walton (Sets and Costumes) who has received an Oscar, Emmy and 3 Tony Awards, Richard Pilbrow (Lighting) veteran of Broadway and London’s West End, along with Christopher Gattelli (Choreographer) who recently won a Tony Award for his thrilling work on the latest Broadway hit Newsies.  It will be the “event of the season” and a show that anyone who enjoys a Broadway musical will love.

Check out these resources to learn more about The Great American Mousical:

We've captured another generation with this production.....our 4-year old grandaughter was mesmerized by the WHOLE show. No fidgeting!

The rest of the family (ages 9-69) all loved the production--and watching the 4-year-old being enthralled. It was wonderful! We'll follow this show to Broadway and beyond. It could become a family tradition!

NOTE: we had one extra ticket for our performance...could have "donated" it to someone. Do you have a mechanism for doing this?

Christine, sorry to hear that you and your granddaughter will not be able to see the show. FYI, we do have special ticket offers during the run of most shows, such as the 2-for-1 offer for Monday 11/19's evening performance, our student rush on Wed-Thurs-Fri evening, and early purchase rates. Check the "Special Events and Offers" page under the "Shows and Tickets" dropdown to find a list of all these specials.

Had hoped to take my 4-1/2 year old granddaughter, Charlotte Grace, to this as she and I, Gigi to Charlotte, love stories like this and as I've been on stage since 4th grade and I had her on stage before she was one, I thought how perfect. Unfortunately, now that I'm currently unemployed a $100+ for two tickets is out of the question. Maybe in flusher times and when it goes to the Big Apple we'll be able be in the audience. BREAK A LEG!

What a fabulous production! The music is glorious, the scenery is exquisite, and the story is truly magical and inspiring. This is truly a treasure to share with your family and children for many generations. I wouldn't expect anything less than brilliant from Julie Andrews and her talented creative team and glorious cast. Watch out Broadway, here comes Pippin and the Great American Mousical! A must see for everyone at any age, congratulations!

This has to go to Broadway! So creative and funny! I haven't seen anything like it. It the days of smoke & mirrors on the stage this play relies on a solid script, original scores said with a chuckle, and pure creativity that I haven't seen in a long time!

I am 8 years old. I really liked The Great American Mousical,directed by Julie Andrews. It was very good because the characters looked like real mice. My favorite character was Pippin because I liked the songs he sang. The musical is a very good show for kids and my Mom and Dad really liked it too.

We have been looking forward to this show since we heard about it and got a taste of the music last January. I ordered the book and read it, and was prepared for an entertaining evening. But it was so much better than I imagined that we are going to get tickets for the end of the run if we can. I overheard that they had been getting new music even the day we were there so I was expecting some "rough spots" but I should have known better. I detected not a note out of place and every actor was a delight. The music and lyrics were so clever, calling each well known musical to mind without actually using the original. Costumes were brilliant: minimally suggesting mice and leaving no doubt about it. Noses, feet and tails were all it really took. Pippin and Adelaide were a great pairing and Toby was my favorite character. That woman does it all with her eyes! Once again congratulations to Goodspeed and Norma Terris. I've never been disappointed. I want to go see this one on Broadway so I can say "I knew you when".

The Great American Mousical show is just brilliant! I was pleasantly surprised. It's the story of mice living in the basement of a broadway theatre. They put up this great "Mousical" for the new year. Zina Goldrich's music is like the music from the great era of Broadway shows with sometimes a touch "a la Sondheim". This show is full of references to classical Broadway shows (My Fair Lady, Fiddler on the Roof, West Side Story, Hello Dolly, Annie, just to name a few). Those references , with their own synonym wording,are cleverly put out of their context to fit another, which makes it even funnier. Tony Walton's designs are very cute with some scenery coming straight out of the book to life. The characters' costumes remind me of the costumes from The Lion King: fitting the actors so we know they are mice without having to disguise them. On that matter, I just love their feet! In conclusion, this is a great show that will appeal to kids as well as adults. 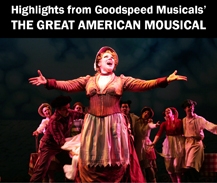