The Roar of the Greasepaint - The Smell of the Crowd

In a world turned upside down, a rag-tag group relies on humor, song and dance to try to build a new life. But can show tunes and music hall merriment revive the human spirit? On the highway of life, hope is just around the bend in this arresting reinvention of the vivacious Broadway hit. Their world may have ended, but songs like "Who Can I Turn To?," "The Joker," "Feeling Good" and "A Wonderful Day Like Today" echo on, welcoming new love and another dawn.

Check out these resources to learn more about The Roar of the Greasepaint...

LISTEN TO THE MUSIC
Songs from The Roar of the Greasepaint... have been covered by hundreds of artists. From Tony Bennett to Nina Simone to Michael Buble and even Avicii, we've got lots of them for you to listen to right here!

Director Don Stephenson has taken the delightful Bricusse-Newley musical Roar of the Greasepaint, torn it's heart out, stomped on it, kicked it in the face, put it through a meat grinder and flushed it down the toilet.
This formerly pleasant, tune-driven entertainment more or less about class differences in the England of the 1960s is here "re-imagined" as taking place in a post apocalyptic setting. So the stage is filthy with junk and debris and the costumes look like they would be rejected by homeless people as too shabby. Both junk and shabbiness work against comedy, and particularly against musical comedy, which Greasepaint is, or was before Stephenson got his hands on it. The cast of several young girls plus the principals has been cut to three very good and hard working performers who, despite their best efforts, can do nothing to save this ugly, unamiable, and finally depressing version of a lovely show. Stephenson is the same director who directed Guys and Dolls at the Goodspeed and, while he had the sense to let the songs alone, he ccmpletly missed every single joke in the book. And I mean that literally, not one of Abe Burrow's funny lines and none of George S. Kaufmann's visual humor was properly realized.
Director Stephenson did the same with Greasepaint, the songs are left intact but the humor is gone gone gone. Only one or two of the songs works ironically in a bomb-crater setting, and the whole exercise is so tedious as to drive people from the theater. After the first act, about a third of the audience was gone. And to be honest, I wish I was among them.
The musical numbers were contextually incomprehensible, and worst of all, the part of the wandering black character who sings "Feelin' Good" is changed to a transvestite, or transsexual, or some type of LGBT person--get the parallel? It makes a viewer wonder where one would find eye shadow and lipstick in a post apocalyptic world, and dismisses the idea of racism, something the original production dealt with if not perfectly, at least sincerely.
Readers, do not spend one nickel of your hard earned money seeing this horrid mess of a show. The actors are, as previously mentioned, highly talented, and try their very best to do what they can to save it, but it's unsalvageable. An insert sheet in the program talks about director Stephenson's "vision"--and if this production is the result, let's hope he never has another. In fact, based on this production he should not be allowed within a thousand feet of a stage door ever again. Ever.

Saw the play last night. The whistle blowing was too often and too loud. 1/2 the audience left at intermission and I think that may be why. I would have liked to see more singing from the two younger actors. Thought provoking play and I think the main drawback was the whistle. Make it stop!! 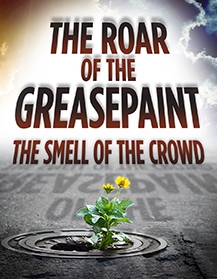 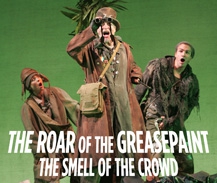