Bon voyage! Set sail on a "de-lovely" cruise through some of Cole Porter's most famous songs. A brassy nightclub singer, a starry-eyed stowaway and Public Enemy No. 13 are booked on a transatlantic luxury liner bound for romance and laughter. Hum along with an easy-to-love score packed with hits including "I Get a Kick Out of You," "You're the Top," "It's De-Lovely," "Blow, Gabriel, Blow" and more! A tap-happy classic docks at Goodspeed for the first time.

Check out these resources to learn more about Anything Goes

The production was wonderful and this was my most enjoyable show at the Goodspeed, which always pleases .Rashrida Scott was wonderful as Reno. She has the ability to be the next Audra McDonald. Looking forward to seeing more of her on Broadway and being nominated for a Tony someday! Stephen DeRosa was the most likeable bad guy since Edward G Robinson. What a wonderful night!

I've been going to Goodspeed for 45 yrs and this was, by far, one of the best shows I've seen. Of course, it's difficult to go wrong with Cole Porter, but this production was top notch. The singing and dancing were both wonderful, but from the moment Rashrida Scott hit the stage, it was her show. This young actress was positively amazing as Reno. Her dancing and singing is right up there with the best of them, but it was her personality and stage presence which set her apart from the other very talented performers in the cast. She positively sparkled. VERY enjoyable show!

Best Show. Cast was phenomenal! loved every minute. Had me taping my feet watching the dancing. Bravo to the lead, she was extrodinary!

The tapping was extraordinary!!! Amazing cast! Excellent production! It was my first time at the Goodspeed, and I'll definitely be back!

Best show ever! Like the new changes. The orchestra can be heared better. More dance floor. Outstanding! 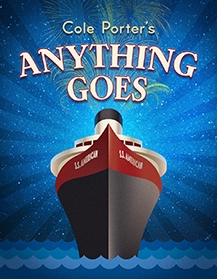 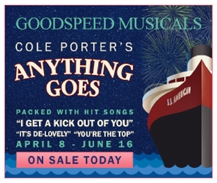