Luck be a lady tonight! Times Square's most colorful characters make their first appearance at Goodspeed in a brassy new staging of the American musical comedy classic. The bet of a lifetime puts a hardboiled gambler in the arms of a Save-a-Soul mission worker in the neon-kissed valentine to the saints and sinners of New York. The alleys echo with the swinging sound of "Sit Down, You're Rockin' the Boat," "A Bushel and a Peck," "If I Were a Bell" and more. Bring your dice along!

Liberty Bank Invites You to Be In The Know!

Check out these resources to learn more about Guys and Dolls:

BroadwayWorld Blog by cast member Noah Plomgren
Welcome to Runyonland
Frank Loesser Fantasy Jukebox
A Bushel And A SWING!
Wrapping It Up

Playbill Photo Gallery: What Happened After the Guys and Dolls Curtain Went Down?

Read what the press has to say

"The Damon Runyon characters of Times Square, gamblers, gangsters, showgirls, saints and sinners, are as fresh and funny as they were, when “Guys and Dolls” opened to acclaim in 1950."
Westfield News - read more

"The current production of GUYS AND DOLLS at Goodspeed is infectious, fast, and smart"
BroadwayWorld - read more 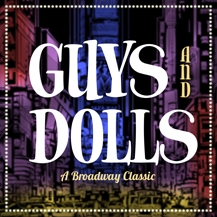 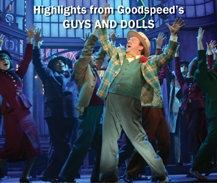