Batter up! Just in time for baseball season comes the muscular musical comedy about a Red Sox super-fan who is transformed into a star slugger after he makes a deal with the devil — and his sexy associate, Lola. Goodspeed re-imagines a Broadway classic with a new Red Sox v. Yankees spin that swings for the fences, no matter which team you root for. In the game of love and baseball, you gotta have "Heart" — but watch out for "Whatever Lola Wants."

Check out these resources to learn more about Damn Yankees:

PHOTO EXCLUSIVE: "Gotta Have Heart!" Behind the Scenes at Goodspeed's Red Sox Reinvention of Damn Yankees

I brought a group of 8 to the show and we all just loved it……a spectacular production…….scene staging was outstanding and talent superb

Great show, even for this Yankees fan! I enjoyed the updated twist to include the Yankees/Red Sox rivalry. Enjoyed the performances of all performers, and especially enjoyed the intermission interaction with the sisters. Well done!

One of the best show I have seen at Goodspeed. We enjoyed every minute of it and our visitors from England were entranced. Thank you all for a great performance.

The production was great as usual.

My wife and I loved the show and the updating to the Red Sox version was done seamlessly. Lola and the Manager were particularly terrific!

This was a wonderful production overall. The individual performances were great too. Very clever to use the Red Sox/Yankees connection. i loved Damn Yankees.

This play was one of the funniest and exciting plays I have ever been to. Lola was amazing and so was Joe. My school loved the show so much. Great job.

We really really enjoyed your production of Damn Yankees. 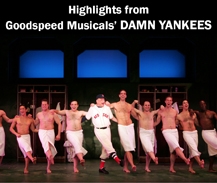 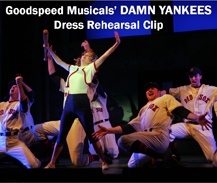