Back together again! The sixties girl group that everyone loves is bringing back the sun, fun and all the great songs they sang on the boardwalk at the Jersey Shore...all to raise money to save Sandy Shores Mobile Home Beach Resort. These Jersey Girls relive their heyday in a non-stop celebration of song with over 30 hits like “It’s In His Kiss,” “Yellow Polka Dot Bikini,” “Heat Wave,” and “Ain’t No Mountain High Enough.” The Bikinis are irresistible!

Check out these resources to learn more about The Bikinis:

August 9, 2012
NEW MUSICAL 'THE BIKINIS' PLAYS THE NORMA TERRIS THEATRE
The Day
Ray Roderick and James Hindman conceived and wrote the piece, about a one-hit-wonder 1960s girl group whose members come back together two decades later. The women have all begun new chapters in their lives. Their children have left the nest, and now the mother are asking: What now?Well, the immediate now involves reuniting... Read More

August 7, 2012
'THE BIKINIS' RECALLS INNOCENT DAYS, NIGHTS AT JERSEY SHORE
Connecticut Post
A new coming-of-age musical set on the Jersey Shore -- "The Bikinis" -- is designed to take theatergoers back to a more innocent era when none of us had yet heard of Snooki or "The Situation" (or even MTV for that matter). Four girls who won a talent contest singing together... Read More

August 2, 2012
Goodspeed Extends Summer!
- Audience Demand Prompts Extensions of both Carousel and The Bikinis -
- Overwhelming enthusiasm for both shows has the box office buzzing -
THE NEWS: Goodspeed Musicals, the first two time Tony Award-winning theatre in the country, announced today that due to popular demand both of their summer productions have been extended. Read More ...

An incredible show - the enthusiasm, the energy, the talent - four amazing ladies dish it out with precision, grace, and warmth. Don't miss it.

Saw the show "The Bikinis" this past weekend and LOVED IT!!!!!! 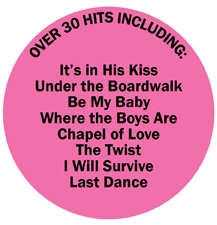 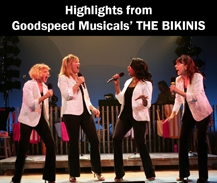